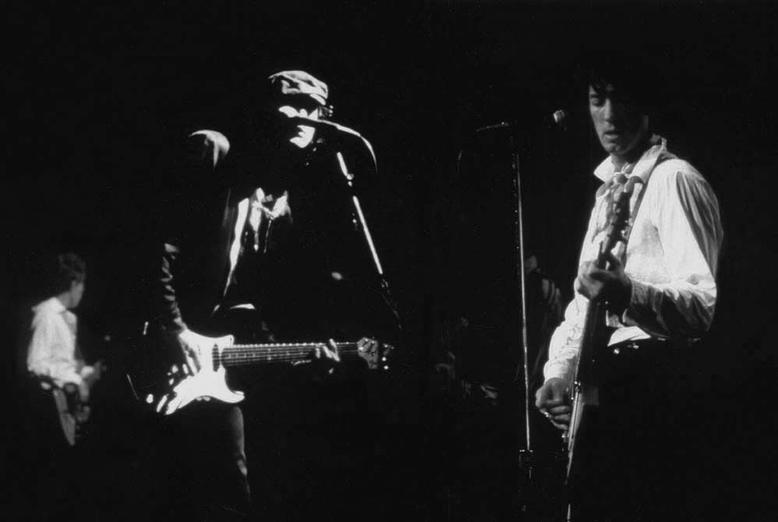 The Pop shared the talent, energy, and DIY attitude of many other bands of the same era, but much like The Stranglers, it was their adventurous desire that made them so hard to  pigeon-hole. The band started out in the mid-70’s as a three piece, with Roger Prescott on guitar and vocals, David Swanson on bass guitar and vocals and David Robinson (who had just quit The Modern Lovers) on drums.

The three new band members moved into a house together and Roger and David began writing songs, hoping to shape a sound out of their favorite music of the 60’s, the British Pop of  The Yardbirds, The Kinks and The Who. When David Robinson moved in he brought along some records by an obscure American group called Big Star who also quickly became an influence on the young band. ( The Pop recorded their own version of  the Big Star song “September Gurls” on a demo for Warner Brothers Records and a little later at a party at Martha Davis of The Motels house, Roger suggested to Micky of The Bangles that they do the same).

Although The Pop struggled for years on the L.A. scene before finally getting their music out, the records they released in the short span between 1977 and 1981 show them rapidly evolving, pushing the boundaries of  pop to include not just their original influences which rapidly developed into a pop-punk hybrid sound of crunchy and jangly guitars but also the more modern sounds they were listening to on David Bowie’s "Low" and  Brian Eno’s "Another Green World" as well. The proof is in the amazing guitar sounds that saturate their Arista LP, GO!,  which was recorded at the famous Sound City Studios with producer Earle Mankey. The bands guitarists liked to boast that they could do anything on guitar a synthesizer could do but cooler and one listen to “Beat Temptation” or “Under The Microscope” backs this up.

In the beginning the band tried out different lineups, sometimes adding a second guitarist; among them Ivan Kral (later with The Patti Smith Band), Rick Bytner, and Steven T. but none of these jelled. Finally after two years with not much more than a couple of showcases at The Troubadour and a few demo tapes to show for their efforts, David Robinson went back to Boston to rejoin The Modern Lovers. (he would soon go on to play with DMZ before becoming a founding member of The Cars).

Though incredibly dejected at this setback Roger Prescott and David Swanson began the frustrating though sometimes hilarious process of finding a new drummer. (Roger tossed one especially obnoxious drummer and his drum kit out into the street after the guy complained that the band sucked because they didn’t know any Genesis or Yes songs). Finally they settled on notorious Hollywood bad boy and low-rider drummer Joel Martinez.

The Pop’s first break came soon after when the band was chosen to play a series of free Bicentennial concerts in Griffith Park and it was here they met the other bands who would join with them to form Radio Free Hollywood, The Motels and The Dogs.

On a tip from Dean Chamberlain of  The Motels, The Pop rented a cheap rehearsal room in the old Columbia Studios lots on Gower Street. They also began recording at Studio Sound Recorders with Allan Rinde as co-producer. (Allan had experience as an A&R man, music writer and studio engineer and also became the band’s manager).

Meanwhile the new Radio Free Hollywood coalition organized their own concert at Trouper’s Hall on La Brea Ave. and from the success of this show managed to break the policy of Hollywood clubs against hiring local unsigned bands to play their venues

Soon The Pop were regulars at The Whisky and The Starwood and played shows at these legendary venues with everyone from Johnny Thunders to Devo, as well as helping other local bands such as The Plimsouls get their foot in the door.

The Hollywood scene was finally beginning to take off and the word was coming in through countless fanzines that a similar renaissance was taking place in New York, San Francisco, Boston and London

It was through one of these fanzines, a ballsy little magazine called “Back Door Man" that The Pop met writers Gregg Turner, Don Waller, Thom Gardner and Phast Phreddie Patterson who would help them release their first two singles and their first LP. (Gregg Turner later formed his own punk band, the infamous Angry Samoans while Phast Phreddie went on to record some great jazzy, poetic albums with his band Thee Precisions and Don Waller's band The Imperial Dogs released some amazing riff-heavy records, among them the classic "This Ain't The Summer Of Love" 7" picture sleeve that was backed with Lou Reed's "I'm Waiting For The Man". )

During the recording of their first LP, (titled simply The Pop) the band added Tim Henderson on bass guitar, freeing up David Swanson to move to rhythm guitar on his Rickenbacker 12 string and Roger Prescott to concentrate more on lead guitar and noise effects. They also added Tim McGovern to fill in on drums for the often missing Joel, and who soon revealed additional talents as guitarist as well.

The Pop believed in the new DIY values of  the punk ethic and their first LP shows it. It is an eclectic powerful combination of  Punk meets Pop and two of the album’s songs, “Down On The Boulevard” and “Animal Eyes” soon became authentic anthems on the Southern California music scene mostly through air-play on The Rodney Bingenheimer radio show on KROQ and the bands extensive clubs dates up and down the coast.

The band kept this five piece lineup for the next year but soon after signing to Arista Records, drummer Joel self-destructed and was replaced first by Robert Williams and later by David Hoskot, with a short period in-between by David Dolittle, who was involved in the infamous Earl Flynn Mansion affair where he, David Swanson and others were shot while camping in the ruins of the deserted property. ( Fortunately the two David’s injuries weren’t life threatening).

Later the same year Tim McGovern left The Pop to join his girlfriends band, The Motels. The band continued on as a four piece. Songwriters Roger Prescott on his scarred Stratocaster and David Swanson on his Rickenbacker 12 string were also renewing their interest in roots and country influences via Moby Grape and The Byrds. ( Both would continue to mine these influences in their post-The Pop bands. Roger Prescott with Trainwreck Ghost, The Holy Boys, Walking Wounded, The Exiles and Texacala Jones and The TJ Hookers; and David Swanson with Route 66).

This sound is documented only by the one EP the band released on Rhino Records, “Hearts and Knives”, on which The Pop returned to Sound City Studios, and a few live tapes that are reported to be floating around. The Pop called it quits on July 4, 1981 and yes, they did plan it that way, The Pop went out with a bang on the 4th of July.